Over 120 business leaders, dignitaries, stakeholders and elected officials gathered to hear from Sen. John Kennedy on how things are going in D.C. as it relates to the local issues and economy. The sold-out event was hosted by the Livingston Parish Chamber of Commerce on June 1 at Greystone in Denham Springs.

Senator Kennedy greeted the crowed as he entered the room. Following his introduction, which included his accomplishments and background, he opened by saying “It is great to be out of Washington D.C….and back in America.”  Always direct and to the point, he made comparisons to Washington D.C. and how out of touch it is in comparison to local communities.

He highlighted the actions that were taken after the flood and addressed the duplication of benefits issue that many faced in Livingston Parish. Senator Kennedy serves on the Appropriations Committee, as well as the Water Resources Committee both of which oversee those issues at the Senate level. After touching on a few other topics, he also addressed current matters saying, “Louisianians and their businesses are hurting badly under the Biden administration’s economic policies. I’m thankful to get to hear from people of Livingston Parish today, and I’ll make sure their voice is heard in D.C.”

Sen. Kennedy opened the floor to questions which started with the hot topic of flood insurance 2.0, including the negative impact it has had on the State of Louisiana. He mentioned the challenges in getting the rest of the country to understand that this is not benefiting rich people on the coast, but rather it is a policy that people here in Louisiana needed in place for their homes. Other questions were on carbon capture and how it is impacting the industry, where Senator Kennedy elaborated.  Student loan forgiveness was also asked of the Senator and how that would impact those who have paid back already or paid their way.

The full address including Q & A can be found on the Chamber’s YouTube page here: https://youtu.be/4MjX1NE10dI. 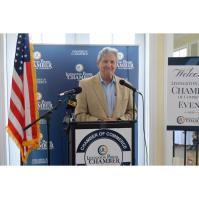