The Livingston Parish Chamber recognized five women with Women’s Leadership Awards. Shannon Bernard representing Primerica, Regina Scott from North Oaks Health System, Kristen Maddox of A Door of Hope Ministries, Dawn Birdsong from Mighty Moms and Delia Taylor of Taylor Media Services were selected after a thorough application and out of state judging process for their leadership in the community and professionally.

Well known child advocate, Judge Blair Edwards, reminded the attendees that leaders relate to those around them rather than passing judgment and separating. She told the story of a father and son she saw transformed when she refused to write them off in her courtroom. The father realized that his own childhood trauma was influencing harsh parenting decisions and negatively affecting his son. By choosing to be firm but patient, Judge Edwards was able to change a family in ways that will affect generations.

Judge Edwards said, “I am blessed to be empowered, so I have an obligation to do something different. Being a leader means being a part of something, having understanding and earning respect.”

Steele shared some of her journey to being an organ donation advocate and the public information officer for the Livingston Parish Sheriff’s Office. She said that she overcame awkwardness and shyness when she was younger to have a career on television news. Her television career got off to a rocky start, but the memory of her mother who had passed away of colon cancer motivated her to tenaciously practice her discipline until she could handle it professionally and competently.

Steele reiterated to the attendees that relationships are an essential tool for any leader. From her mother who believed in her, to a station manager who continued to give her second chances, to her husband who has supported her career and many co-workers and teammates, Steele said success comes from strong relationships.

Livingston Parish Chamber President and CEO April Wehrs said she is excited with the turn out for the event. “A lot of Chambers are instituting women’s events and we saw an opportunity to promote the leadership of women here in Livingston Parish. This event is a collaboration of our committee and member businesses who care about our parish.”

More about the winners here:


2018 Women’s Leadership Awards
Those being recognized for winning the award in collective areas of achievement in professional excellence, contributions to improving quality of life and who actively LEAD in making Livingston Parish Better – the Chamber’s tag line and mantra.  An open nomination and application process is the manner in which the names were presented.

Dawn Birdsong is the co founder and current Executive Director of Mighty Moms.
By recognizing a need in a community and engaging those who want to help, she built an inclusive organization.  Her passion was to answer to the calling of those who are hungry and is now a well know organization thanks to her allowing others to help elevate the name, offering and services.  Dawn is also a partner in a family business.

Regina Scott – North Oaks Health System, Assistant Vice President  Ancillary
Regina was charged with growing North Oak’s presence in Livingston Parish. She was part of the move to the Satsuma location and participated in the entire process of bringing the facility to the parish.  Her career includes starting asa radiologic technologist and is now a department manager.  In 2015, she was named the North Oaks Leader of the Year.  She volunteers for numerous community events and serves on the LEDC board of directors and the Livingston Parish Chamber board.  She is a graduate of the inaugural Leadership Livingston Class of 2013.

Kristen Maddox - Founder & Executive Director  A Door of Hope
Kristen used her own struggle and experiences to assist young women who are battling addition and abuse today.  She grew the organization to the status today and spearheaded the purchase of a building to accommodate the residents in need of services.  When it comes to mentoring young women, there is no comparison.  In 2017, she served 485 clients.  She sees the potential in all no matter what their past is and encourages women to dream big, work hard and achieve greatness.

Shannon Bernard - Primerica - Regional Vice President
A former educator who transitioned into a full time representative for her current business.  She has received numerous state and national awards for her production and serves on the women’s advisory committee.  She serves on the Chamber board as well as Ochsner and other boards.  She is a graduate of the inaugural Leadership Livingston Class of 2013.  She is a foster parent who adopted her daughter through the foster care system.  She is a musician and volunteers in music ministry plus children’s musical productions.

Delia Taylor - President Taylor Media Services
Delia lives, works and volunteers in Livingston Parish.  She is a public information officer and press secretary for state wide agencies.  She has been featured for her niche work in local tax elections.  She is one of the few women in the state to manage political campaigns.  She worked as a television news producer / assignment editor for WBRZ.  She has serves as an expert panelist,  adjunct professor, is a nationally certified public relations professional and is the immediate past chair of the Public Relations Association of Louisiana.  She is also chair of the chair of the Livingston Parish Airport District and also a private pilot.  She is a member of the Pilot Club, Livingston Parish Republican Women, the Livingston Parish Chamber and many other organizations.  She advocates for female student athletes and mentors young women in the communications field. 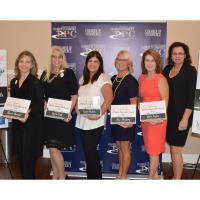